AA Collections Blog is pleased to publish an extract from Patrick Zamarian's authoritative new book on the postwar history of the AA (Lund Humphries, 2020). Making extensive use of the AA Archives, this is the first major study of the school in the 1950s and 60s - and is available for purchase, in time for Christmas, at the AA Bookshop!! 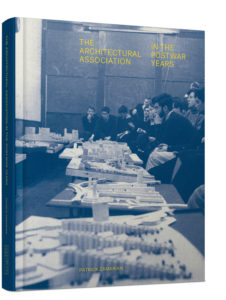 AA Collections Blog is pleased to publish an extract from Patrick Zamarian’s authoritative new book on the postwar history of the AA (Lund Humphries, 2020). Making extensive use of the AA Archives, this is the first major study of the school in the 1950s and 60s – and is available for purchase, in time for Christmas, at the AA Bookshop!!

“Brutalist Eclecticism:
The heightened reputation of the AA in the second half of the 1950s owed much to the fact that it provided a home for the vanguard of British architecture, notably Peter Smithson and John Killick, at just the moment when, through their activities in CIAM and the agency of Architectural Design, they were thrust into the international limelight. In 1954, the Smithsons had completed their Miesian school at Hunstanton, while Killick and his future partners, Howell, Partridge and Amis were designing the Alton West estate at Roehampton, the first large-scale adaptation of Le Corbusier’s Unité d’habitation. Both schemes attracted international interest and are today seen as early examples of an architectural style – Brutalism – which from the late 1950s began to spread worldwide.

The use of the term ‘Brutalism’, nowadays indiscriminately applied to almost any building in exposed concrete, requires clarification. In 1966, Reyner Banham, in an attempt to claim British provenance for what was clearly an international phenomenon, proposed a differentiation between ‘New Brutalism’ as a distinctly British ‘ethic’ and ‘Brutalism’ as an internationally applied ‘aesthetic’. Despite the obvious difficulties involved in synthesising a definite relationship between the two, illustrated by Banham’s failure to provide a coherent canon of buildings, historians such as Kenneth Frampton – who from the early 1980s onward established Brutalism as an integral part of the historiography of twentieth-century architecture – by and large adopted his line of argument. More recent scholarship has done little to negotiate the dichotomy inherent in Banham’s definition, with writers either situating Brutalism within the international Team 10 context of the late 1950s and early 1960s and thus to some degree downgrading the British contribution or, conversely, embedding it in the London art discourse of the early 1950s and divorcing it from subsequent architectural developments.

Banham’s British bias was understandable since – while the Brutalist style derived from Le Corbusier’s postwar oeuvre and had its parallels in other countries – the rhetoric surrounding the term ‘Brutalism’ (albeit not the term itself) was undeniably homegrown. The Smithsons first used it to describe their unbuilt project for a house in Soho in December 1953, and their prominence among young British architects ensured that it triggered a sustained debate in the correspondence columns of the architectural press (and presumably many a social gathering). It is noteworthy how closely this debate remained linked to the Smithsons’ thinking. Independent views on Brutalism were conspicuously absent as contributors confined themselves to interpreting the possible meaning of the Smithsons’ characteristically obscure statements, much like the ancient Greeks tried to make sense of Pythia’s prophecies. Robin Middleton argued that Brutalism was essentially ‘what [the Smithsons] said and did’, and in the 1950s the two were indeed coextensive.

The Smithsons themselves did little to clarify matters as their priorities shifted over time. Hunstanton, their Brutalist manifesto scheme ante litteram, was a major contribution to the postwar discourse on proportion; in January 1955, they published their first written statement on Brutalism, stressing its affinity to ‘peasant dwelling forms’, which provided the ideological backdrop for the MARS Group’s village housing schemes for CIAM 10; in the same year, Banham, in consultation with the Smithsons, published his own take on Brutalism, introducing image memorability as one of its objectives and a-formalism based on topology as the methodological device to accomplish it; finally, in 1959, the Smithsons linked their definition of Brutalism to their growing preoccupation with urbanism: ‘The essential ethic of Brutalism is in town planning.’ In other words, the Smithsons’ priorities changed, and so did their notion of Brutalism. 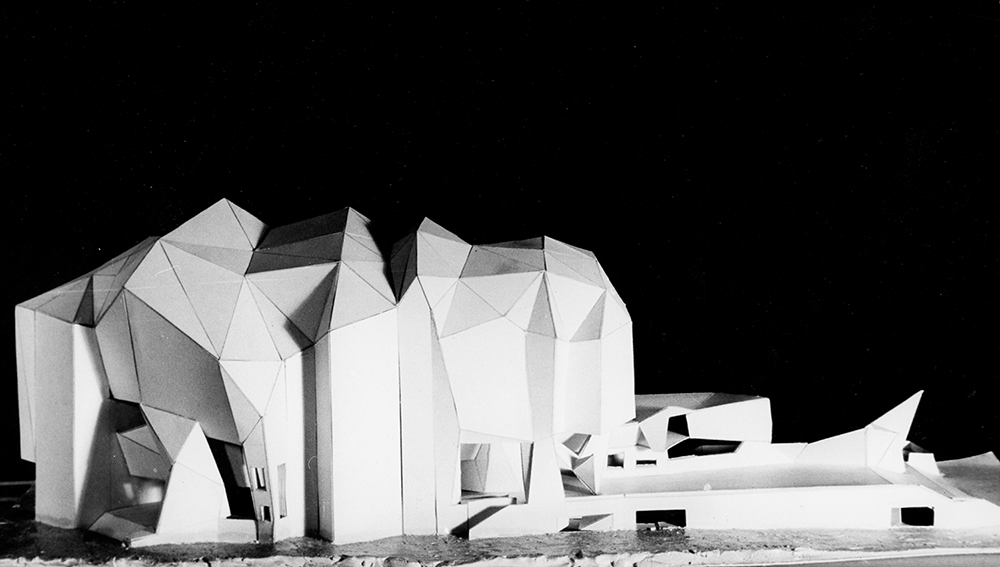 The one consistent thread running through the Smithsons’ writings was a recall to first principles and a corresponding insistence on ‘clear exhibition of structure’ and ‘valuation of materials “as found”’, to use Banham’s phrasing. The Smithsons saw these as the core values of early modernism (i.e. prior to its being codified as an International Style and popularised for local consumption at the Festival of Britain) and called for a ‘re-evaluation of those advanced buildings of the twenties and thirties whose lessons [. . .] have been forgotten’. There was just a little step from ‘re-evaluating’ to emulating or even imitating these buildings, and in principle at least the Smithsons’ approach differed little from the historicism of previous eras apart from the fact that their models stemmed from the more recent past. In its essence, Brutalism was, as Banham himself conceded, ‘modern-movement historicism’.

This notion resonated with AA students such as Robert Maguire, Neave Brown, David Gray, Patrick Hodgkinson and John Miller, who were equally disenchanted with the state of modern architecture in their country and sought their inspiration for a new formal expression in the ‘heroic period’ of continental modernism. As Miller recalled: ‘It seemed in the early fifties that architecture had been diverted from its true antecedents and, in consequence, the source material of the 1920s and 1930s was exhumed after being neglected for over a decade.’ It seems worth pointing out in this context that these students’ reaction against the Festival style in the form of a modern-movement revival was immediate and noticeable in third-year student work by, for instance, Gray and Hodgkinson as early as 1952. It should therefore be seen as a largely independent process which, though echoing the Smithsons’ activities, was not directly influenced by them and predated their first substantive writings. 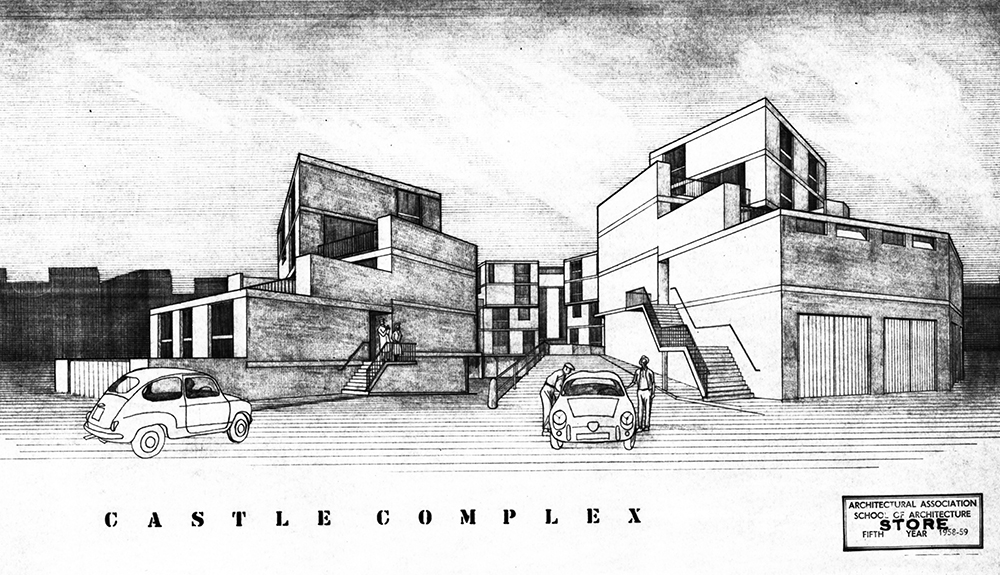 While the derivative idiom of the Festival of Britain provided its most readily available target, the students’ architectural insurrection was driven by a more deep-seated disillusionment with the postwar building programme and its lack of formal vigour. In a talk to the AA in April 1954, fourth-year student Colin Glennie acknowledged the high standard of housing and schools in the country but maintained that ‘architecture is not simply the fulfilling of a social programme’. Two months later, fellow student Neave Brown expressed the changing attitude in the school as follows:

By the immediate post-war students the work was seen to have an enormous social importance to the community, far more than its particular aesthetic importance, but now we see around us the failure of so many schemes, and the student’s sense of responsibility has become more introverted, and he considers how his work is an aesthetic contribution to what may be called Western culture.

A mystified Lewis Mumford urged the AA’s students not to follow Mies and Le Corbusier into the ‘bottomless pit [. . .] of purely formal and aesthetic solutions’. Yet, with Killick emerging as the dominant force in the fourth year and Smithson taking charge of the fifth, the students’ preoccupation with matters of style gathered momentum. Smithson was clear about his intentions:

Style is a problem that I think has been completely neglected since the days of William Morris. [. . .] In the key year of 1913 there were the beginnings of four distinct architectural styles: Constructivism, de Stijl, Purism and Bauhaus. Each of these movements had an attitude and a complete, comprehensive, plastic system, that is what used to be known as style. The schools and institutes, the academies of today, do not teach style. They make no approach to the problem of architecture; they make an approach to technology, to technique, but the central problem of creating an actual architecture they ignore.

Smithson’s impact was felt throughout the AA. In a series of packed-out lectures to the entire school, he drew upon Banham’s research into the early history of modern architecture to direct the students’ attention to its ‘major minor figures’ (notably the futurists and expressionists), thus expanding the catalogue of possible precedents and placing ‘modern-movement historicism’ on a much broader basis. In doing so, Smithson was chiefly responsible for the Brutalist eclecticism which took hold of the AA in the late 1950s. Discussing the annual exhibition of student work in 1957, the Architects’ Journal noted that ‘one can pick one’s style according to one’s taste, particularly if it is early 20th Century’, and according to Cook, Killick alone absorbed a year consisting of ‘five Christian Weirdies, two Bowellists, half a dozen proto-Neo-Futurists, recherché Edwardians and various persons of no particular persuasion at all’. 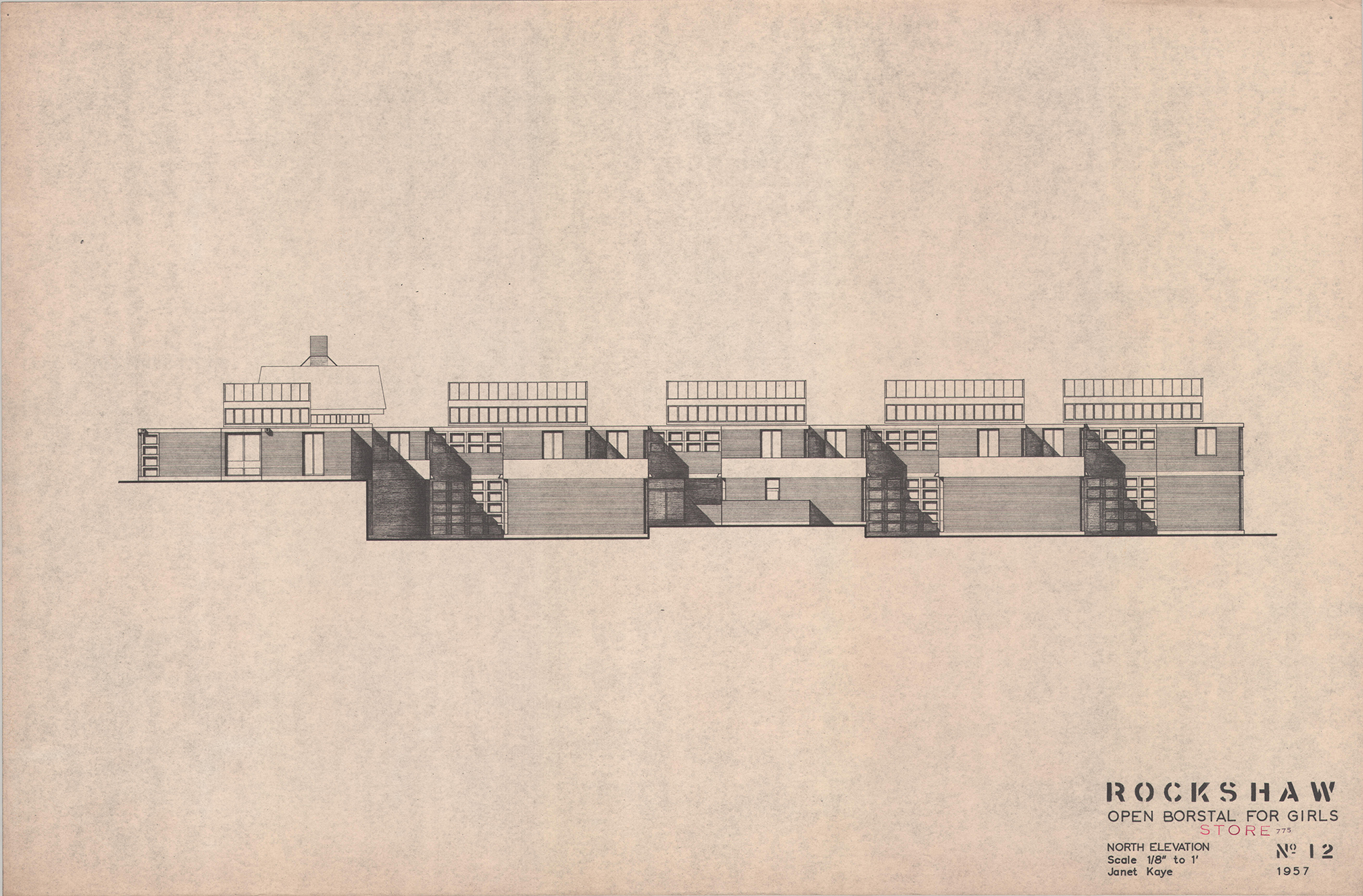 Smithson and Killick’s own work at the time reflected the changing mood. In 1956, they prepared a sculpturally bold scheme for the Sydney Opera competition consisting of two asymmetrical auditoria cantilevered from a central tower, with the exteriors covered in mosaic and the interiors lined with a tortoise-like shell made of lacquered scarlet and crimson. Peter Cook felt that Smithson and Killick’s joint submission was ‘the link back to the student work carried out under their wing’, and the students’ creative efforts more than matched their masters’ formal audacity. According to the Architects’ Journal, the AA was ‘losing its Miesian calm’, and Michael Pattrick observed a predilection for ‘the irregular, the severe, the brooding and sometimes the convulsive’, which he suspected ‘might come as a disagreeable surprise [to] architects who have spent the last twenty years lightening and refining every detail over their buildings’.

Though both Killick and Smithson nurtured this formal exuberance, their tolerance of eccentric deviators had its limits, particularly when they resorted to pre-modern precedents. Killick, for instance, fiercely opposed the work of the ‘Christian Weirdies’, a group including Andrew Anderson, Malcolm Higgs and Quinlan Terry, whose quest for originality found its stimulus in Arts and Crafts models. According to John Outram – one of the ‘Bowellists’ and later a pioneering figure in British postmodernism – by the time Smithson left the AA in the autumn of 1960 he too had become increasingly uncomfortable about his part in inspiring the extreme eclecticism in his students’ work: ‘Smithson said he regretted giving these lectures because they had created this enormous outburst of strange buildings, but it was too late by then.’” 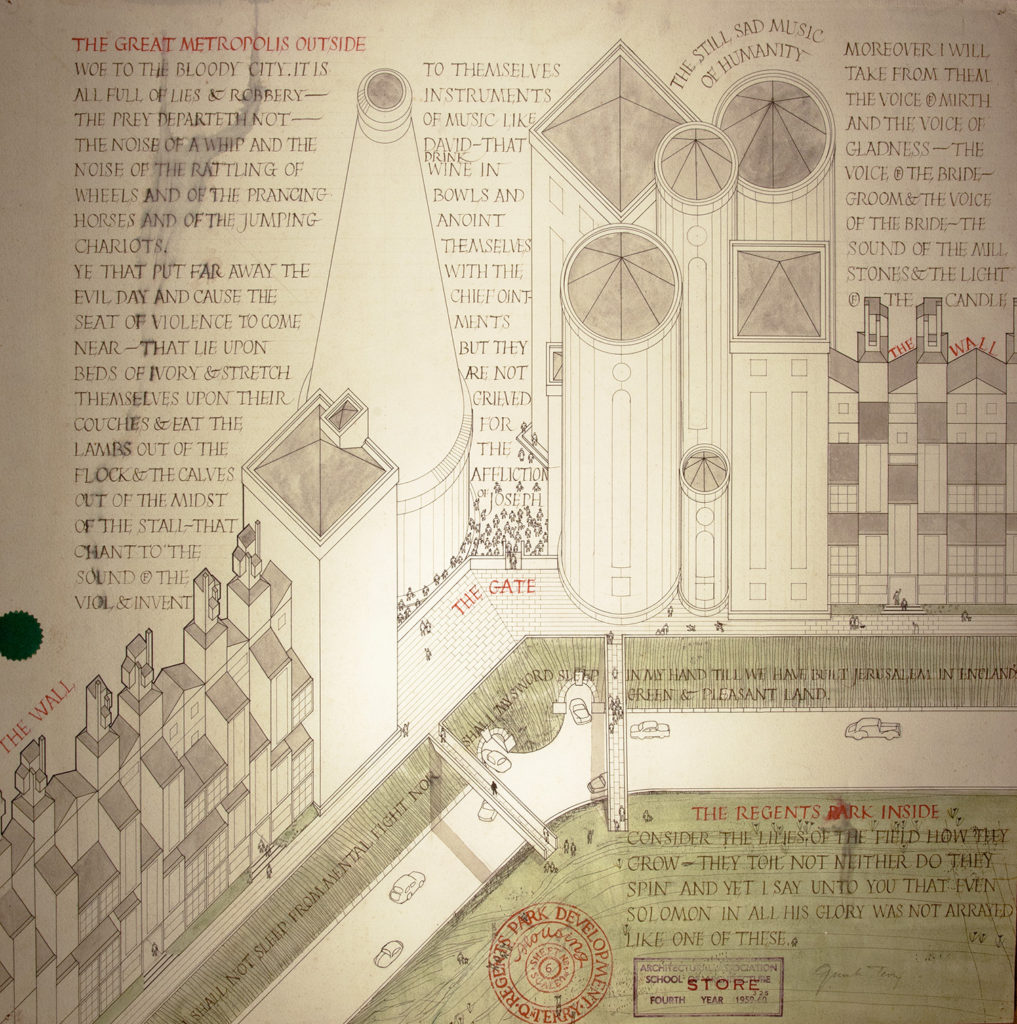 Extract from Patrick Zamarian ‘The Architectural Association in the Postwar Years’, Lund Humphries, 2020, is published courtesy of the author and Lund Humphries.